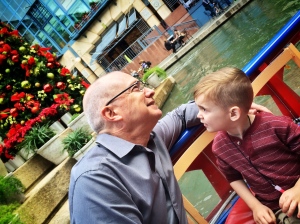 On a recent trip to San Antonio, Texas with our grandson Jackson, Ralph and I were reminded how magical a place it is in the eyes of a child; and a wide-eyed sense of adventure and imagination was reawakened in us.  Time is fluid as the river here – ancient Spanish missions smack-dab in the middle of bustling city attractions, ghosts of bygone warriors and settlers very much a part of the modern, urban landscape.  What follows is an old memoir I wrote back in 2010 after a business trip to San Antonio.  Responding to the time-warp nature of this city, I post it here – a 4-year-old memoir recounting my childhood memories of great family vacations (particularly one in San Antonio in the 1970s), a subsequent disappointment in the inevitable changes time brings, all illustrated with photos of our 4-year-old grandson experiencing the same fascination I had as a child (which served to rekindle that feeling in me and his Grandpa), creating the wonder and memories to grace his own, wide-eyed future…

Here on a business trip to San Antonio, walking along the city’s famed Riverwalk(a brilliant civil engineering project, bringing bustling tourism to a rather nondescript, Texas mission town), memories of one of our best family vacations welled up in me like the great San Antone flood of 1921. Ahhhh…family vacations. Think back on all the great ones you had growing up; and they will likely come flooding into your brain with absolute clarity, in living color. It shows what an impact they make on a child experiencing the world. Whether it was a big production of a vacation (a flight to California to experience Disneyland in its heyday), or you just piled into the family automobile and headed out to rough it in the country, it colored your world, opened your eyes, taught you valuable lessons, and left an indelible mark on your psyche that remains vivid as the blue skies, vermillion sunsets and glowing campfires that “wow”ed you.

During the early part of my childhood in Hawaii, we didn’t really “go” places on vacation. The islands are one of the most remote places on earth; and air travel for our big kit-n-kaboodle was way beyond our means. Not that we didn’t have GREAT summers…our motherland was always there to entertain and sustain us. We had no complaints! But the concept of packing up and going somewhere else after school got out for the summer was foreign to us. We were perfectly content to go on fun-filled beach picnics with our cousins; and I looked forward to summer afternoons with my older brother at CYO (Catholic Youth Organization) Camp, fishing in mountain streams with the nuns or learning to string koa seed leis with a needle and thread. (The pungent smell of the koa seeds boiling in water to soften them still piques my powerful scent-memory!)

My Grandma Mahelona did, however, take my brother Stephen, sister Malia and me on our first trip out of Hawaii, to “The Mainland” when I was five. To a kid from Hawaii, “The Mainland” is a big, foreign, fairytale kind of place…filling all our storybooks, TV shows and movies; and going there for the first time is not just a rite of passage…it’s practically a rocketship ride to outer space! That first big trip, by the way, didn’t just  open my mind…it blew a freaking hole in it! My siblings and I experienced our first jet airplane ride, saw our first squirrel and snake (a 2-headed one, no less…at the San Diego Zoo), picked wild, Georgia blackberries, tasted cheesecake at Disneyland (which I thought tasted disgusting at the time), fell in love with a dish called “lasagna”, went to the Santa Ana horse races, tasted Burger King hamburgers (and wore the paper crowns on our heads for days), gathered our first, treasured pine cones and…er…experienced racial hatred for the first time…so shocking to us, being so far away from our idyllic, racial melting pot in the Pacific. 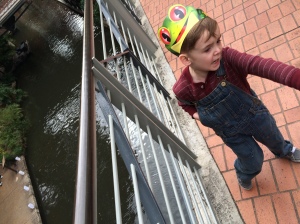 Moving to Texas a few years later gave our family a newfound mobility that had been out of our reach in Hawaii. Mom and Dad could pack all 5 kids into the Vista Cruiser station wagon with loads of egg salad and tuna sandwiches, coloring books and boxes of Crayolas; and road adventures by the dozen would entice us beyond the borders of our new, Lone Star home. Crossing the astonishing Mississippi River, awakening at a rest stop early in the morning to the sound of bobwhites calling, catching a sugar rush off a Stuckey’s Pecan Log (grudgingly shared amongst the 5 of us), posing for Polaroids at the Brazos River, squeezed, smiling, in a gigantic dinosaur footprint in the riverbed, and digging huge snail fossils from the terracotta mud of the Red River…these were just a sampling of the many family adventures (misadventures?) awaiting us.

It was the late 1970s; and my Grandma Mahelona, who shared many of our great summer vacations, was visiting us from Honolulu. This time, it was the Mean Green Machine, Dad’s notorious, green-and-white ’75 Chevy Blazer, that transported us from our suburban home on the prairie to the Home of the Alamo. I was pretty darned excited; as I had studied the Alamo in 3rd grade – even garnering a front-page photo in the Grand Prairie Daily News for my depiction of the famous mission’s façade!  The Alamo, as it turned out, was SO much smaller than its legend had built it up to be; but the city of San Antonio absolutely captivated me.

It was another world from another time – so different from anything I had experienced at that point in my life. When I was little, I remember elders and aunties describing me as having “itchy feet”, remarking how I LOVED to “holoholo”, a Hawaiian word for taking leisurely journeys (and an indicator that I would be one ensnared by the love of travel). That truth, combined with my inherited sense of adventure and my own, overactive imagination, transformed even ordinary places into worlds of wonder.  The thriving, modern city of San Antonio “became” the wild, “Tejas” frontier, filled with suspicious Tonkawa warriors lurking in the reeds, watching our tourist-packed motorboat putt-putting along the muddy, “alligator-infested” river, while hungry puma stalked us from the boughs of ancient live oak and cypress overhead.  While my boating companions marveled at the city’s towering needle from the 1968 World’s Fair, I carved new paths into Indian territory. It would take way more than the tour guide’s lame jokes or the tinny Tejano music blaring from speakers in the trees to snap me out of my great adventure! 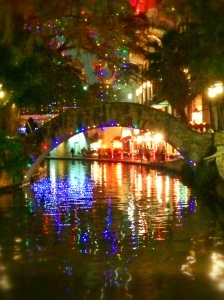 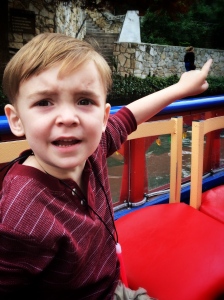 One of my fondest memories from that trip was the day my parents took us to have lunch at the famous Mi Tierra restaurant, which anchors the farmers’ market, El Mercado.  It was a humid, sweltering day while we strolled excitedly through the outdoor stalls: brightly-colored flags flapping in the much-appreciated breeze and hawkers selling big, embroidered-velvet sombreros and little, tin and onyx trinkets.  I licked my lips as we passed big, cool jars of “aguas refrescas” in thirst-quenching lime, watermelon and tamarind flavors.  My inner adventurer immediately grabbed my hand and took me off to Old Mexico. 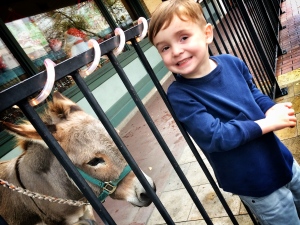 In the old hacienda, our noble “familia” was served a grand meal: great platters of steaming enchiladas, savory frijoles, cooling mounds of guacamole and stacks of fresh, pillowy tortillas. As strolling mariachi musicians sang to us and beautiful Mexican women dressed in colorful, voluminous skirts smiled and gracefully flitted about, we stuffed ourselves silly. I know now that this was the beginning of my lifelong addiction to Mexican cuisine. (And I had yet to discover the margarita!) 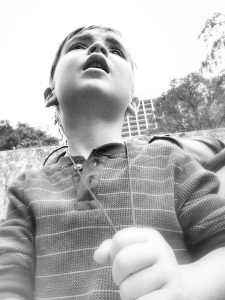 If our beautiful meal had been an awakening of the senses, our stop in Mi Tierra’s bakery on the way out was a full-on assault as powerful as that of General Santa Ana. We stopped dead in our tracks in front of the big, glass cases filled with sweets and pastries of every shape and size, a riot of color and sugar, all competing for the attention of the 5 drooling Mahelona kids. We were bedazzled by the unfamiliar and scrumptious-sounding Spanish names: empanadas, pan dulce, campechanas; and we were especially enticed by the little coconut squares fluorescently dyed in the red, white and green of the Mexican flag. I was most intrigued, however, by the large chunks of glistening, sugar-soaked sweet potatoes and “calabazas” (pumpkin); and I savored them, little by little, on the long drive home and for days afterward, trying to hold on to that vacation as long as I could, to make those awesome memories stick.

As I sit here again at a table at Mi Tierra, some 30-odd years later, I realize they did, indeed, stick….swirling around me as deliciously as the icy, salt-rimmed margarita in my hand. But has San Antonio, or the world in general, changed so drastically…or is it my jaded, adult worldview that has changed…so different from the wonder of my childhood? The food tastes like cafeteria fare, not like something “abuelita” cooked over a hot stove in the back of the restaurant. El Mercado is now a series of air-conditioned indoor shops, all selling the same cheap, mass-produced tchochke. And the mariachi bands I have always loved so dearly? They’re still here; but their beautiful, acoustic “canciones” are drowned out by the plugged-in, Ecuadoran flautist playing the Everly Bros on Peruvian pan flute. (Hey, is this the same guy from the subway back home in New York City?!  And…what exactly does this music have to do with the culture and heritage of San Antonio, Texas?!)

I frown in disappointment at the world’s great destinations losing their unique identities; then smile at having had parents that continually fed my sense of adventure and discovery. I pay my tab and thank the young, Hispanic waitress, her tattoos and multiple piercings clashing with her traditional Mexican costume (somewhat stylistically, but more so anachronistically, like a Victorian woman wearing a space helmet). I’m glad I revisited; but I doubt I will eat here again this trip. On my last day in San Antonio, however, on my way to the airport, I make a stop at Mi Tierra’s bakery, still as eye-catching (and popular) as ever. I buy a bag of golden, guava campechanas for old times’ sake, to take to my brother and sisters in Dallas. And as our first buttery, flaky bite gives way to the sweet-sour fruit within, it all comes rushing back to us, that fabulous family vacation…and we know we will always, always “Remember the Alamo!” 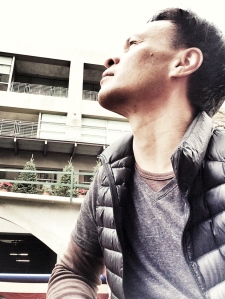