Am I blue? (pondering defeat in the midterm elections…)

A loaded question, for certain.  I awake with the feeling – a dread – that a major disaster occurred through the night, and a scorched landscape is revealed by the sunrise.  The political landscape, that is.  (OK, I’m being a bit of a drama queen, I admit.)  The midterm election results are simply disappointing at face value, but troubling at a deeper level.  Hopes of a new guard in Texas and Kentucky and elsewhere have proved fruitless, but still remain active, put on the back burner to simmer and allow the flavor to develop fully.  Disappointment in the minority group in Congress that behaved like a bratty child in the midst of a meltdown when it couldn’t have its way has been replaced by trepidation over how recklessly that same group will behave with its shiny new toy, Majority.

So what am I worried about, exactly? I live in New York City, for crying out loud!  We have marriage equality here.  Women have the support here to be masters of their own bodies.  No one has to SELL us on universal healthcare.  Diversity?  We don’t just talk the talk; we walk the walk…and we do it with a sassy groove.  Samba, salsa, merengue, bhangra, Horah, Yoruba…pick your rhythm.  We GET that our city flows smoothly through the toil of immigrant workers; and for that, we are thankful, not resentful.  We respect and revere our cathedrals, temples, synagogues, churches AND our mosques. 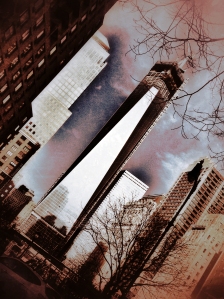 My fiancé, Ralph, and I moved to New York City for new jobs, for excitement, for new perspectives. But the political/social/cultural/economic environment here, so markedly different than the Texas model in which we had grown up, KEEPS us here.  Upon our arrival as residents rather than visitors 10 years ago, it felt as if we had been cloaked in comfort, in freedom, in promise – as if we had been handed the last piece of a large and challenging jigsaw puzzle and bestowed the honor of popping it into place.  I’ve had this conversation with many friends who live or have lived here:  New York City is a tough Mother; but she is loving and just.  She won’t spoon-feed you; but she will reveal opportunity and give you the kick in the butt you need to pursue…no matter WHAT shade of human you are.  Living in New York City, our political, social and world views finally felt in alignment with our surroundings.  Local politics, though scattered with a few shady characters right out of film noir, is generally something we worry very little about.  For the most part, in this area of the country, there really IS a “we’re all in this together” attitude.  So when we vote here, it doesn’t have the same excitement as REVOLUTION.  We vote because it is our honor and privilege; but we aren’t changing the face of politics here or upending the apple cart.  Everyone at the polls is pleasant and calm; there are no camera crews filming outside, no electricity in the air.  We smile at one another, with the mutual and unspoken acknowledgment that we are doing our part to make the political process in New York serve EVERYONE.

So why the HELL do I get so worked up at election time? Why all the petitions, the donations, the political PSAs and voting encouragement on the social media stage? Why all the teeth-gritting and politician-exposing and the twitching finger constantly on the verge of hitting UNFRIEND? Because politics isn’t the same in other parts of the country as it is here in New York City; and I worry for those I love who live in those places.  I worry for my sisters and nieces to have control over every decision regarding their bodies and health – EVERY decision.  I worry for my grandson to have the scientific research and funding to combat the serious and chronic disease that picked the lock and unpacked its sorry luggage.  I worry that my niece has the freedom to love whomever she chooses and has the legal support to protect her relationships.  I worry for the right of all the children in my life to have good, well-funded education based on SCIENCE that will prepare them for the world stage.  I worry for the freedom of my loved ones to worship whomever or whatever they wish, or dismiss it altogether – without anyone getting “all up in their (Holy) Kool-Aid” about it.  I worry for the future of my loved ones to be one of prosperity, not indebtedness; one of abundance, not scarcity.  I worry that in the face of government’s shameless trysts with Big Business, the people I love are becoming faceless.  THAT’s why I get so damned worked up at election time.  Am I blue?  Maybe it’s not so much sadness, but rather, the twisting discomfort of worry that troubles me.  That’s it – I want a color for worry.  We have red for rage, yellow for jubilance.  We need one for worry.  Am I blue?  Maybe I’m just dark maroon.

But, alas, Texas, Kentucky, Iowa, Arizona, Colorado, (fill in any state here), I can’t do it for you.  It’s like being in junior high school and knowing your kid sister is getting bullied in elementary school – you’d kick the bully’s ass if you were there, at the same school.  If it were even remotely an option, I would have cast my ballot to vote out of a job your useless Governors and Representatives; but I can’t.  YOU have to vote.  YOU have to make the difference.  YOU have to hold your elected representatives accountable for representing YOU.  YOU have to pay attention to politics.  YOU have to usher in the new guard.  YOUR life depends on it. 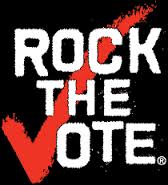 So why is it so different here, in this city, this state, this Northeast region? Is it because the memory of immigration is still so fresh, here?  Is the history, the channel to freedom and opportunity, the Great Melting Pot, still alive, here?  Is it because the abolitionists thrived and did their great work in this region?  Is it because the labor movement triumphed here?  Maybe it’s because here, we get to see the beautiful Lady every day, standing strong in the harbor, reminding us:

Not like the brazen giant of Greek fame. With conquering limbs astride from land to land; Here at our sea-washed, sunset gates shall stand A mighty woman with a torch, whose flame Is the imprisoned lightning, and her name Mother of Exiles. From her beacon-hand Glows world-wide welcome; her mild eyes command The air-bridged harbor that twin cities frame. “Keep, ancient lands, your storied pomp!” cries she With silent lips. “Give me your tired, your poor, Your huddled masses yearning to breathe free, The wretched refuse of your teeming shore. Send these, the homeless, tempest-tost to me, I lift my lamp beside the golden door!” 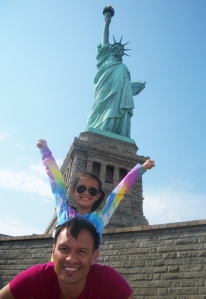 I love the adoration my little loved ones hold for the Lady. We are determined to turn the wheels of politics in a direction that benefits them.  I hope that by our example, they will remember and honor the Lady’s inscription; that their world views will be driven by compassion and giving, intelligence and respect, honor and honesty.  I hope that they will soon find a government in service to THEM, a true democracy in which THEY drive, THEY benefit, THEY prosper. 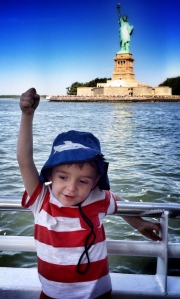 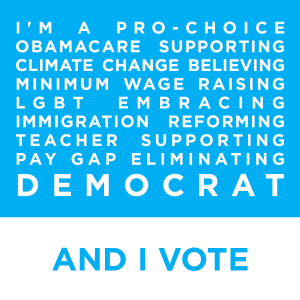